You are here: Home / "Mobile Friendly" and Your Credit Union: Lessons From Google's New Search Algorithm

Mobilegeddon has come and gone. On the morning of April 22nd, the sun still rose in the east and set in the west and the moon, as far as I can tell hasn't fallen from the sky or changed the tides in any unusual way.

Still, despite the hyperbole, the changes announced by Google in early 2015, to how it would calculate and rank sites in mobile search has implications credit unions would be wise to take note of.

The two largest implications are the effect on organic and paid traffic with a third implication around what does this mean about overall predictions in consumer tends?

How does mobilegeddon affect organic traffic

It’s now been a week since the algorithm change, and while sources differ on the exact impact, the consensus is that the impact isn’t as major as previously expected.

The mobile friendly ranking signal is just one of many signals in determining rank and for larger, established credit unions, your brand and recognition factor still carries significant relevance weight across your search ranking.

However, despite the less than armageddon-like destruction of mobile search ranking, the shift in Google’s attribution of mobile value isn’t something to take likely for two additional reasons.

The same day mobilegeddon was wreaking fear in the hearts of organic search marketers,  a mobile friendly tag was spotted in adwords copy on Google Canada. 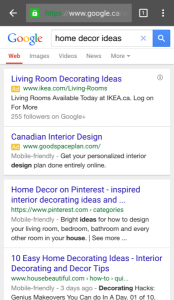 Photo via The Sem Post
The official statement from Google was that it was a test and mobile friendly does not, at this time, affect quality score.

However,  that’s not to say that a roll out in the future wouldn’t affect quality score, in particular for those targeting mobile devices and location.

With all this emphasis on mobile, whether it affects your search ranking or your bid costs and ad position is almost a moot point.

The reality is that mobile as a means of accessing information and making purchase decisions is a significant consumer trend.

Mobile as a consumer trend and how it affects your strategy

All of these changes by Google should capture your attention if for no other reason than this: mobile is one of the most significant shifts in the way consumers seek information, make decisions and engage with the world around them . 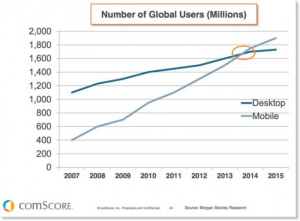 Consumption of media on mobile devices including television and movies continues to rise while attention to interactive advertising on these device outpaces ads in traditional media.

So what does all of this mean? Marketing and digital member experiences need to expand beyond just creating mobile banking solutions that members want to use.

Ad buys, content, marketing sites and engagement efforts all need to focus on their mobile counterparts as well for every stop around the digital ecosystem.