You are here: Home / Revisit Your Credit Union's Millennial Strategy

I've written off and on about credit unions and millennials. I've had the privilege to speak to credit unions and leagues/associations on the topic. Mostly, I think because I'm unabashedly a Millennial myself. Albeit on the older end of the spectrum.

Often, these writing opportunities or speaking engagements begin with:

" tell us about how we can better reach millennials."

It's a good prompt. It means credit unions are thinking about segments of their membership. One, that has many credit unions scratching their head.

The issue I often take is when people seek a silver bullet.

I love audience segmentation. As a marketer, it's crucial to what I do.

But I'm also a social scientist.

So when I'm asked to give a few bullet items on reaching the largest generation since the Boomers, I  get a bright white flash and inevitably end up here Instead:

Let me explain why

You likely have your assumptions about the millennials generation. They're lazy, broke and myriad other adjectives, most of them unflattering.

When talking about generations, it's difficult. Cohorts span significant periods of time. With millennials, in particular, at this moment in their life, we're spanning a period that can cover high school and college graduation, entering the workforce and starting a family and settling down.  Each one of these carries it's own set of psychographic characteristics and maturity to individuals.

Instead, let's look at facts, not adjectives.

The millennials have become the largest generational cohort since the boomers, various research centers put the group between 75 - 80 million strong in the U.S.

This generation grew up in a world marked by tragedy and uncertainty: 9/11, economic collapse, and the world at war in multiple zones.

But perhaps most interesting, is with size comes a significant economic force. As the economy recovers, and the generation matures, it's becoming clear that millennials DO have assets. However, the approach to personal finance and spending is different than in the past.

The millennial generation was the generation that brought Facebook to worldwide, mass adoption, by all segments of the population.  They were among the first to become glued to their smartphones and to trust an algorithm, not a person, with their retirement.

By all accounts, the Millennial generation represents early adopters.

In hordes, they use Uber over taxis, AirBnB over traditional lodging. They represent the upslope in the adoption bell curve of the Diffusion of Innovation Theory. In a nutshell, the theory attempts to explain how products, ideas and other innovations spread throughout a group of people. It suggests that adoption moves representative to a bell curve where adoption begins with innovators and early adopters before moving out into the bulk of the population. Businesses will often assign time periods to sections of the bell curve to help facilitate product updates or release of new products all together to keep a steady flow of innovation being released into the mainstream. 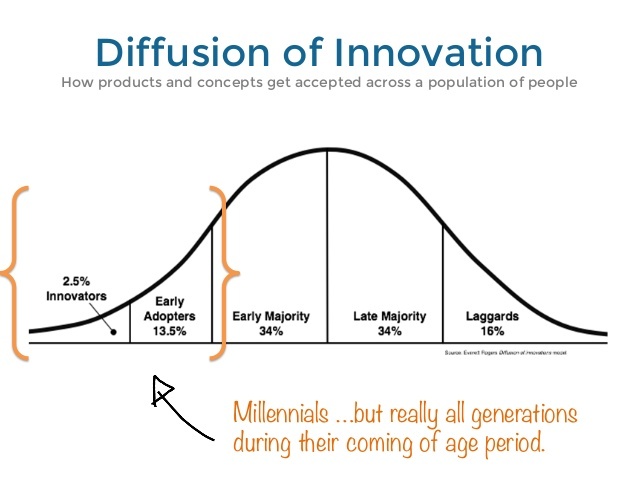 But here's the rub.

During their late teens to early thirties, most generations have a period where they spend time in this portion of the curve.

That's not to say as a generation ages they never return, however, every generation brings with it innovations and leads the charge with the adoption of innovation that inevitably starts to spread across a populace.

The Canary In the Coal Mine

If it stands to reason that Millennials aren't just a field of membership segment needing to be reached,  but rather early adopters who indicate potential trends that may spread across your field of membership, what should a credit union do?

Look at what they're doing and consider these new trends across other segments. 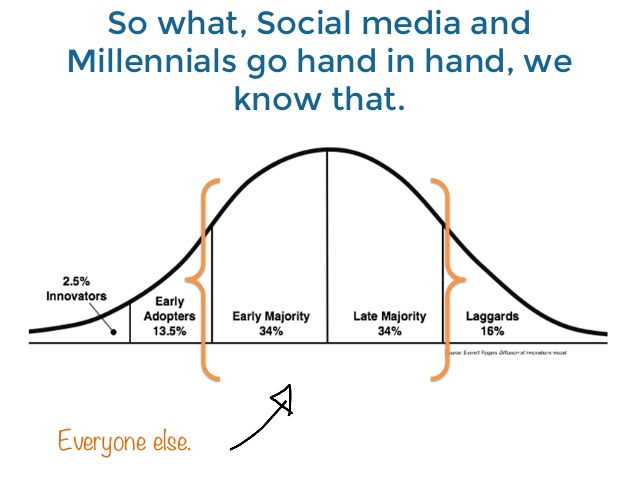 Rewind to 2004 as Facebook began spreading across college campuses, then the general public. Along came Twitter, and YouTube continued its growth. As social media continued to pick up steam, particularly among millennials, many credit unions and other organizations sat watching, calling it a young person fad that had no implications to business.

Instead of looking at the trend as something affecting only millennials, ask yourself: what might this look like if this trend spreads across other segments of my field of membership?

In this case, the diffusion of innovation theory would shift the thinking to deliver something like: social media is an emerging channel that distributes a variety of information. How can my credit union leverage this near free channel to disseminate personal finance and investment information to the rest of our field of membership to meet their financial needs as their adoption of the channel increases?

Of course, in this scenario we have the benefit of hindsight.

What Happens When The Prompt Changes

When your credit union shifts it's thinking from "how do we reach millennials" to "what can we learn from millennials" a few things happen.

First, your credit union leadership becomes proactive, instead of reactive, creating strategies that put you ahead of the curve.

Second, you kill two birds with one stone. In the process of setting your credit union up strategically across other field of membership segments, you accomplish what you originally set out to achieve: reaching millennials.

But in the process, instead of just putting out a fire with one segment, you've strengthened your overall credit union's approach for other segments as adoption picks up.

Finally, you start to create a culture of innovation.

This is related to becoming proactive versus reactive. When your credit union starts to look trends holistically, you start to see bigger and bigger pictures and can plan accordingly.